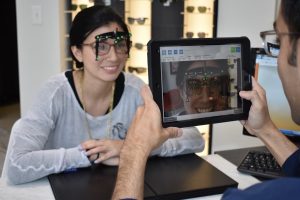 Eye Floaters are tiny specks, spots, and flecks commonly referred to as ‘cobwebs’ that drift around a person’s visual field. These floaters are common with many individuals and aren’t/shouldn’t be a cause for alarm. These ‘cobwebs’ or spots appear when minute pieces of the eye’s vitreous (the gel-like substance) break loose at the back of the eye near the retina.

Although the translucent substance is smooth and consistent throughout a person’s childhood and youth, it begins to liquefy and dissolve creating a watery substance as one gets older. It is after the vitreous starts breaking down and dissolving that some undissolved gel particles start floating around the liquefied center, thus the term eye floaters. The particles do not necessarily have to be of the same size or shape.

These floaters may be hard to detect as one goes on with his/her day-to-day life. Gazing at a computer screen with a light-colored background, or a clear sky, however, makes it possible for one to notice particularly pronounced specks and floaters. While you may not be able to see the floating debris, you should notice tiny shadows deep into space. These shadows are as a result of the floaters blocking individual rays of light from reaching the retina, thus casting the shadows.

Should you try to focus on the whitespace, you will notice the shadows/specs floating around. The spots only move once the vitreous gel inside moves creating a ‘drifting’ feel.

When Do Flashes and Eye Floaters Become a Medical Emergency?

Almost everyone (including those with perfectly healthy eyes) notices a few floaters once in a while. This is entirely normal. If you, however, see showers of spots and floaters accompanied by flashes of light inside the eye book an appointment with an eye care professional for specialized treatment. Such signs are early symptoms of posterior vitreous detachment, whereby the vitreous may be pulling from the retina. Another possible reason for this could be that the retina is being displaced from the inner eye lining. This lining is the primary source of oxygen, nutrients, and blood, essential compounds needed for the healthy functioning of the eye.

The retina is the most important and delicate part of the eye. Should the vitreous gel tug on it, it could tear the delicate area. The gel-like substance can also push the retina farther way into the eye socket causing a condition known as retinal detachment.

According to a study published in Ophthalmology, 39.7% of patients that experience the sudden symptoms of flashes of light and/or eye floaters had posterior vitreous detachment, while 8.9% were diagnosed with a torn retina. A separate research on the same also shows that 50% of patients with retinal damage consequently develop retinal detachment, which almost always leads to significant vision loss.

If detected early, an eye surgeon can reattach the detached retina or fix retinal tear thus restoring one’s vision. This is the reason why ophthalmologists recommend seeking medical attention as soon as you start seeing flashes of light inside the eyes.

Photopsias or light flashes can occur if the retina receives a mechanical (non-visual) stimulation. This mostly happens if the retina is torn, being tugged, or detached. The patient may see random sparks, flickering lights or lightning bolts when this happens.

Vitreous floaters can be caused by PVD (posterior vitreous detachments). These symptoms can/may be linked to retinal detachments and tears as well.

Under normal circumstances, the eye is filled with the vitreous gel which gives it its form and shape. This gel attaches itself to the retina at the back of the inside of the eye. As one gets older (past the youth stage) the vitreous gel starts liquefying at the center. The liquefied gel becomes weaker with time making it incapable of supporting the much heavier gel surrounding it. In extreme conditions, the peripheral vitreous gel collapses into the liquefied gel at the center, which at times forces it to detach from the retina.

The outer gel breaks down into smaller pieces which form eye floaters in the liquefied gel. This mainly happens if too much of the vitreous gel at the center had liquefied. According to studies and research, most individuals will have PVD by the time they hit 80 years. Thankfully though, posterior vitreous detachment does not always lead to a detached or torn retina.

If the process of posterior vitreous detachment happens gradually and slowly, the patient will not be at a risk of a detached retina. In addition to this, the light flashes and pressure on the retina subside once the posterior vitreous gel has detached completely.

The retina depends on light stimulation to produce an electrical impulse that the brain can interpret. The electrical impulse can be interpreted as either an image or just pure light. Mechanical retina stimulation is however interpreted as a flicker of light by the brain. As mentioned earlier, mechanical stimulation can be due to the retina being tugged, detached or torn due to extreme PVD. The flickers of light interpreted from this may be short-lived or continue indefinitely depending on how the detachment takes place. These flickers, however, subside as the retina is repaired or heals.

A sharp blow to the head may also cause photopsia, though short-lived. This, however, happens if the blow was strong enough to cause the vitreous gel to shake, a phenomenon commonly known as ‘seeing stars.’

A series of heat waves in between the eyes can also cause flashes in some individuals. The heat waves may be due to spasms of blood passing through blood vessels to and inside the brain. A headache or a migraine may ensue after that. Some patients may experience light flashes for a few minutes and never have a headache after that. This condition is called ophthalmic migraine.

Eye flashes could also occur as a symptom of digitalis toxicity, particularly in seniors. This often happens to older people taking drugs for heart-related conditions.